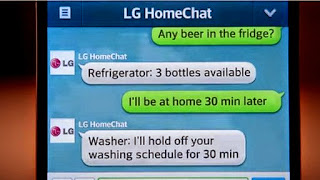 A new LG text chat service allows fridge owners to see what food is inside as well as controlling other home appliances from the company. The app can only be used to do this in South Korea, but LG said it planned to extend it to the US and other markets at a later date. Samsung has already released air conditioners, fridges and washers that work with its rival Smart Home service. http://www.bbc.co.uk/news/technology-27308869 Would you like some toast? Does Anyone Want Any Toast? - Red Dwarf - BBC
internet of things