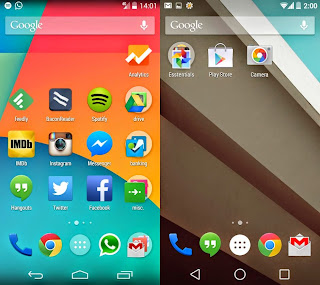 Android L is here, and it's brought a raft of new changes, with Sundar Pichai, head of Android, proclaiming it to be one of the biggest upgrades to Android yet.

It's going to have a radical new design, 5000 new APIs, will be available for developer previews soon, and it's going beyond the mobile form factor. Android L will be contextually aware of its surrounding, plus voice is going to me a major input source.


Android L is an upcoming release of the Android mobile operating system developed by Google. Unveiled on June 25, 2014, and released in a beta the next day for selected Google Nexus devices, it is expected to be released to manufacturing in late-2014.

The most prominent changes to L include a redesigned user interface built around a responsive design language referred to as "material design", and improvements to the notification system which allow them to be accessed from the lock screen, and displayed within other apps as banners across the top of the screen. Internal changes were also made to the platform, with the Android Runtime officially replacing Dalvik for improved application performance, and changes intended to improve and optimize battery usage. https://en.wikipedia.org/wiki/Android_L
android art dalvik