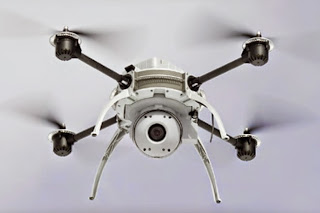 Computer scientists at MIT and Cornell University have developed a prototype autonomous helicopter providing lighting for photographers, which readjust its position as the subject moves to achieve a constant lighting effect.

The researchers concentrated on producing an effect called rim lighting, in which only the edge of the photographer’s subject is strongly lit. They will present the work at the International Symposium on Computational Aesthetics in Graphics, Visualisation, and Imaging in August.